I am absolutely delighted for Roger Penrose. He has contributed so much to mathematical and theoretical physics, it is a surprise to me that he hadn’t won the Nobel Prize sooner.

When I was first getting into mathematical physics twistor theory, originally proposed by Penrose in 1967, was a topic that I had been obsessed about, particularly as it then came to twistor string theory and the amplituhedron. It remains a notebook project for the future, but the great enthusiasm and interest I developed for the twistor programme I think aided my focus in mathematical physics before arriving at university. The geometry of twistors and the twistor description of massless fields, as well as his description of Grassmannian space and Grassmann algebra were things that left me inspired. In hindsight it is nice to think about how, as twistor space is chiral and treats the left and right handed parts of physical fields differently, my current thesis is building on what I think is a wider project involving the chiral string which is not so far removed.

In the world of modern mathematical and theoretical physics it seems one is never too far from a Penrose contribution. It was not too long ago when I was thinking about the Ward-Penrose transform, which has a wonderful relation to the geometry of strings. Then of course there are the beautiful Penrose Tilings. But I don’t think the discussion is complete without also recognising the importance of his views on different scientific and philosophical matters. Whether one agrees or disagrees, Penrose’s views on quantum mechanics and objective collapse, with his theory of dual fields, serve as more than sampling food for thought. Additionally, I’ve personally taken a lot from his views on mathematical Platonism in which he relates the Platonic mathematical to the physical and the physical to the mental, and so on. The topic of a separate essay, there is quite a lot here to unpack and develop in the context of the wider history of mathematical thought.

For the layperson or even the engaged student of physics, The Road to Reality is one popular book that I would not hesitant to recommend. It is a proper masterclass, which goes into many important ideas in modern physics and does not spare on the mathematical details. The stories of Am-tep and Amphos in the prologue followed by the discussion on the roots of science is perhaps one of my favourite introductions to a book.

Having said all that, it is not possible to write a post celebrating the work of Penrose without mention of the singularity theorems for which the Nobel Prize was awarded. He showed that, as a consequence of General Relativity, black holes are a deeply general phenomena predicted to emerge in cases of gravitational collapse irrespective of symmetry. A key concept here is that of a singular manifold and trapped surface as related to geodesic incompleteness.

The proof of the Penrose singularity theorem is quite nice. There isn’t enough space here to detail it in full, but a summary of what the proof looks like might be a nice way to conclude the present entry (should one like to work through the complete proof here is a good text as well as notes and review).

First some definitions. Let us consider some spacetime

, which we may think of as being singular if it is not geodesically complete. Now, in a global analysis, let us define

to be a globally hyperbolic spacetime in which we denote

the Cauchy hypersurface and

, the proposition is that

is trapped if the expansions

of the null geodesics are negative everywhere on

. The initial conditions for the null geodesics are assumed to be

, and they satisfy the null energy condition.

be a global time function such that

. The integral curves of

are timelike, and they only intersect the hypersurface

is an open set and defines the chronological future along each point of the compact surface. What we obtain is a continuous injective map with an open image

. What is really cool is that if we have a point

that chronologically precedes the point

, with the future-directed chronological (timelike) curve from

, following a number of definitions and corollaries, it can be shown that should

then in some neighbourhood of

are images of points in

. In the full proof one can then show that there is a contradiction in the intersection of the integral curves of

is trapped there exists some

such that the null geodesics

. One can complete the proof from this point, finding that indeed should

be a connected globally hyperbolic spacetime, where the Cauchy hypersurface

is non-compact and satisfies the null energy condition typically written

the spacetime is singular. Like I said, it is quite nice!

Before this post grows too long. I would also like to leave a special note congratulating Reinhard Genzel and Andrea Ghez in sharing the Nobel Prize in Physics. I cannot profess to have read their papers, but a review of their history and extensive work shows that for decades they have made significant contributions to long-term scientific research focusing on Sagitarius A*! The astronomers in the blogosphere will be able to speak more to the methods both Genzel and Ghez have developed, as well as the technicalities of the brilliant techniques they have prioneered along the way to providing the most convincing evidence to date of the presence of a supermassive black hole at the centre of our very own galaxy! For myself, I look forward to reading a few of their respective papers. Meanwhile, here is a 2017 article discussing some of their research. 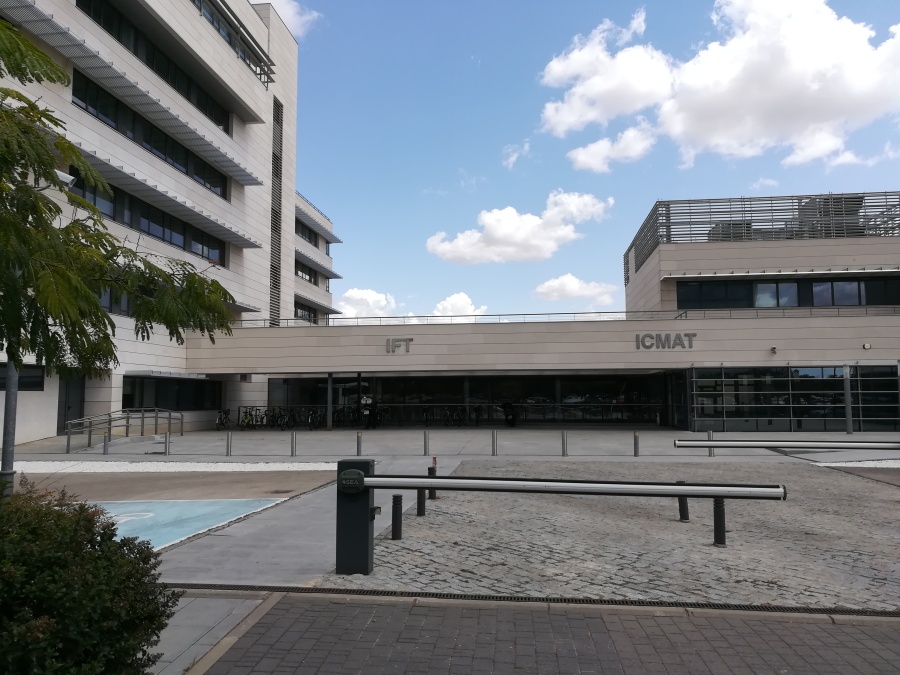 SiftS 2019 concluded on Friday. It was an enjoyable two weeks of study and discussion on topics in string theory and holography. Eran Palti and Kyriakos Papadodimas were for me the highlight of the event. This is not meant to take away from others, it is just that Palti and Papadodimas were one of the main reasons for my attending SiftS. I could sit and listen to Papadodimas talk physics for hours. And Palti’s lectures on the Swampland were outstanding, as expected.

If I had one minor personal grief about the summer school as a whole, it’s that there wasn’t enough pure string theory. But it is very likely that I would say this at a number of different engagements, with the exception perhaps of Strings 2019 and String-Math 2019, two of the main string conferences. So it is unfair to make any such complaint formal, and one must also be mindful that while string theory was the theme, the engagement wasn’t necessarily meant to serve pure stringy discussion.

All of this is to say that I am both thrilled and honoured to have had the privilege of attending SiftS 2019. To mark its conclusion, I want to take a moment to congratulate the SiftS organisers for putting together a terrific summer school. I also want to take a moment to thank everyone at the Universidad de Autonomous Madrid for their hospitality and support throughout my stay. My impression of the university before arriving was that it was one of the best in Europe, and I left the campus and the Instituto de Física Teórica UAM/CSIC with the same view. I can say with honesty that I very much look forward to my return at some point in the future.

Now that SiftS is over for the year, and with the conclusion of my admittedly brief holiday during the weekend, I have returned to my research and studies at the University of Nottingham. There is a lot to discuss and catch up on with Prof. Padilla, with a number of possibly interesting ideas percolating. My return to Nottingham also means that I will start actively blogging again. In addition to covering some interesting topics from SiftS 2019, I am also working on a number of research projects which will be nice to write about in the coming days, weeks, and months. I will also be continuing my series of string notes, where the reader and I are on our way to covering the whole of textbook bosonic and superstring theory. We will start from where we left off, namely an introduction to conformal field theory. (In the background, I am going to continue working on my blog to fix the LaTeX of older posts as a result the move).

With regards to SiftS 2019 in particular. I will not write about all of the lecture series and topics covered. Instead, I will focus on sharing my notes and thoughts from the lectures by Palti on the Swampland and by Papadodimas on the Black Hole Interior. This will serve as a nice opportunity to also reflect on some of their respective papers, and to summarise key arguments.